Skip to content
HomeCulture: The origin, history of the Bamasaba and Imbalu

On August 6, thousands of people, foreign and local descended on Mutoto Cultural Site at the foot of Mount Elgon to witness the Bamasaba celebrate 200 years of imbalu (circumcision). The imbalu rituals, which are the cultural transition from boyhood to manhood, are a series of visits to revered traditional sites such as swamps, hills, caves and mud, artifacts, objects and ornaments, music, dance, busera (local brew) and sacrifices. The Standard’s RONALD AWANY joined the festivities and witnessed the unfolding of history.

The site was a beehive of activities with blistering business ranging from the sale of food to soft and alcoholic beverages. It was a time of merry making, as Vincent Masaba said: “It is a non-stop party. There is always loud music and it gets worse in the night because there is too much alcohol and everyone is always drunk, with the attendant consequences. People deserve to be happy but they are doing it dangerously here.”

On circumcision day, I am amused by the large numbers of people at the site. Over 30,000 people in my estimation!

The youthful groups of initiates from different clans and villages donned in light but colourful outfits, decorated with animal hides, beads, and ash-painted faces.

The ash is derived from the ingredients of the local brew known as “busera” or “malwa”, and it is intended to make them look fierce and bold to show elders that they are ready for initiation.

Escorting them is an entourage of their peers holding sticks in the air and singing initiation songs. Some of them are barechest and most of them appear like they have not taken a bath in days.

The stamping of their feet could be heard from a mile away, so the air was filled with dust; and it also reeked of the stench of sweat and booze, as they drank busera and sprayed it out with their mouths.

But all the noise, dust and chaos did not matter. It was Imbalu Day, the day boys turn into men. For Bamasaba, it was a celebration. 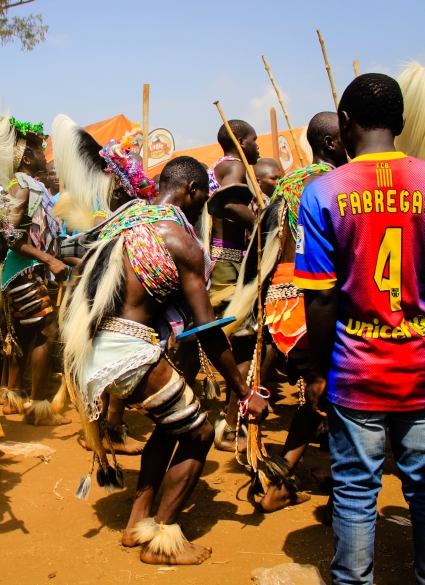 The Bamasaba and the origins of circumcision

Magombe Wakitonyi, an elder from Mutoto, says the people of North Bugisu or Budadiri county, originated from a man known as Mugisu, the son of Masaba, who is the eponymous ancestor of the Bamasaba. These are the people called Bagisu.

Those in central and southern Bugisu were respectively founded by Ngokhwe and Wukuya, Mugisu’s brothers. The Central Bagisu are generally called Bangokho while those in the south are loosely called Basukuya, named after their respective founders.

Within these large groups there are numerous divisions and clans bearing the names of their supposed founders. The correct collective name for the people of Bugisu is, therefore, Bamasaba.

It is held that the name ‘Bagisu’ was mistakenly applied to the entire tribe by the Baganda and the British who were ignorant of the local situation.

The origin of circumcision among the Bamasaba is linked to the ‘Barwa’ otherwise known as the Sebei.

It is held that Masaba wanted to marry a woman from Sebei, but this could not happen unless he was circumcised.

So, circumcision was introduced by Nabarwa and originally performed in accordance with the customs and rites of the Barwa.

The Bamasaba refer to their circumcision as ‘Imbalu. ‘Nabarwa’ also means ‘that of, or which belongs to the Barwa’.

Mutoto village in Bungokho in Central Bugisu is regarded as the traditional ground where the first Mugisu male was circumcised.

Ever since, every circumcision year, it is customary for circumcision to start in Bungokho before spreading to other parts of Bugisu.

Currently, it is performed every even year, but in the past, it could be postponed in the event of a national crisis such as prolonged drought, famine, epidemics, and war.

Although circumcision experts/surgeons are found in every clan, their work is not necessarily restricted by clan boundaries.

They often perform their duties beyond the traditional boundaries of their clans.

Wakitonyi’s account is supported by the journal, ‘The Historical Origins of Circumcision among the Bamasaba’, by Gideon Were.

Wakitonyi argues that there are different accounts of how the practice started.

“Some say it was a Barwa woman who started it.

The woman was married to Masaba and when they had children they were circumcised after the tradition of Nabarwa.”

He added further that it was Nabarwa who instructed Masaba in the practice of circumcision for, according to the Barwa, women also performed circumcision.

“Masaba was also circumcised by the Barwa,” Wakitonyi said.

Another reason given for the adoption of the ‘circumcision of Nabarwa’ is that Masaba proposed to Nabarwa who replied that she could never marry an uncircumcised man (umusinde or boy).

In order to marry her, she proposed he gets circumcised according to her people’s customs. Masaba was circumcised and so became a man (umusani) to get his bride.

Dr Stephen Mun’goma, the chairman Governing Board of the Inzu Ya Masaba and director of the Uganda Christian University, Mbale University College, weighed in on the debate as to when circumcision started.

“To the best of my knowledge, it began in 1815 and that is why the circumcision year is named Nabarwa. Others think that it began 2018 years ago, and if it is the correct date, it is still within the period of 200 years,” he said.

The road to imbalu 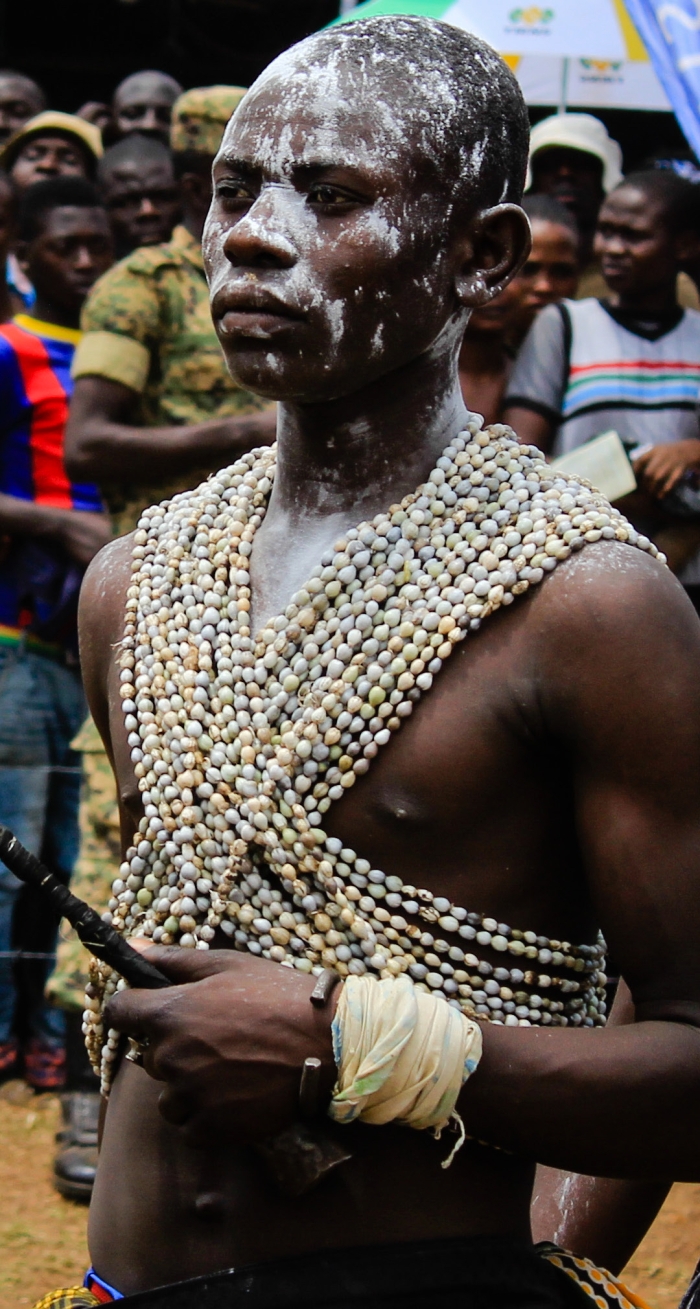 In January, prospective male candidates aged between 15 and 20 years, assemble in each village and are regimented in various ways in order to imbue them with courage in readiness for initiation.

Between March and August, they are taken through the isonja preparatory dance. It features specialist performers/singers called by different names, ‘kyilali’, ‘namwenya’ or ‘uwimbi’. The singers use special equipment, songs and dance strokes.

Towards August, before the actual circumcision event, the candidates are taken through a traditional pass called ‘luwanda’ where they meet other clans and proceed to the sacred swamps.

They are taken to mwidoyi (mud) where they are smeared with clay (itosi).

They are called all sorts of names and traditional beer is spat upon them.

A day to the circumcision, the elders or ‘basakhulu’, clean out the sacred graves and rebuild the shrines as designed and desired by each clan.

During this stage, each candidate is taken to his mother’s clan (ibwiwana) to announce his intensions to his uncles and receive gifts before they go to the courtyard prepared for circumcision.

On the day of circumcision, after elaborate instructions and blessings from elders, the initiates are taken to the appointed grounds by each clan to face the surgeon (umukembi), who uses a double-edged knife to remove the foreskin.

“On this day, the dancing is so intense and the candidates are possessed because of the rituals carried out on them, they feel the urge to face the knife,” Robert Wamale who faced the knife in 1998 said.

After circumcision, drums are beaten and people indulge in dancing and drinking. The drums are called ifumbo ye kyiguga (the drums of the clans).

“The process is quick and professional. This is the best part that everyone has been waiting for.

The surgeon is a specialist who has been doing this for a long time, he has to accomplish the task in 60 seconds or less, failure to do that will result in punishment. Should the surgeon also hurt the candidate in a way that can endanger the life of the candidate, the surgeon will be in trouble. The candidate is also not supposed to shake or fear during the process, lest they face punishment and are deemed weak,” Wamale adds.

The imbalu cycle that began with the ‘isonja’ singing and dancing then terminates with the ‘ineema’ confirmation ceremony. During this ceremony, which will be in 2017, the fully healed young men are coached on how to live and behave responsibly and are confirmed as full members of the clan. They are also seen as men basani (singular, umusani) and not basinde (singular, umusinde) as previously known.

The Masaba male, regardless of age, status or wealth is a full man after circumcision and is allowed to marry and beget children and participate in the decision- making process of the clan.

The Standard is published bi-monthly by the Uganda Christian Department of Mass Communication. It seeks to inform, entertain and educate the university community as well as developing students' talent and expertise in Journalism through annual hands-on training.

Find us on Social Media